The title of this post is again plagiarised. I have always planned to write an article on the “spanish style” which revolutionised javelin throw in the 50s, and, while researching, I found an article with this title, by T. Isaacs, in the 1992 volume of Athletics: I liked it to the point of filching its title.

Let me state from the outset that I find the “classical” style of javelin throw extremely pleasant aesthetically. Moreover the fact that, with the 1986 rules, the javelin ends its trajectory by planting itself is a definite improvement over the gliding trajectories. Still, when it comes to the longest throw one should look about all the available ways to send the implement as far away as possible, and in fact there was a period when javelin competitions were held both in the “classical” style and in what was called “free style”. 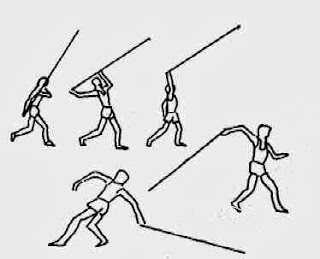 In the classical style the javelin must be grasped at the centre of the shaft. In the free style the javelin could be thrown in any way: two fingered at the tail, like fly-casting or shot by a thrust from behind through a left-hand bridge rather like a billiards cue or, even, grasped at the tail and slung discus fashion. The last Olympic competition of free style javelin throw was in 1908, with E. Lemming winning also the title in both styles (with throws of 54 m in both).

The first revolution in javelin throw came with the work of Dick Held (brother of the world recordman Bud Held) who introduced first the hollow-wood javelins and then the aluminium ones. Being hollow, the javelin had a larger surface area and better aerodynamic properties. It would glide much further than the traditional finnish and swedish javelins but it had the tendency to land flat. (The Held javelin was later banned by the IAAF, but Dick Held was a main consultant in the 1986 redesign of the competition javelin).

However the true revolution of javelin throw came in 1956 when a 49 year old spaniard, Félix Erausquín, invented what came to be called the “spanish style”. Erausquín was a specialist of shot put and discus throw (with several national titles and records) but also of the “barra vasca” which consists in throwing a heavy rod using a rotational technique. Erausquín adapted the style of the barra to javelin throw with a greased hand and managed a throw of 83.40 m at a few centimetres of the world record.

Several spanish athletes followed suit and the records mushroomed. At this point much mythology exists and it is practically impossible to know exactly which are the real performances and which are the imagined ones. One finds references of Jose Luis Celaya throwing 91 meters and of Miguel de la Quadra Salcedo at 92.81 m. (There are references of the latter throwing 112 m but this is probably just a myth. I tend to think the same concerning a 100 m throw by the italian discus ex-world recordman and 1948 olympic champion A. Consolini). The one throw that is well documented is that of the, at the time future, olympic champion and world recordman, norwegian, E. Danielsen, who threw the javelin at 93.70 m. 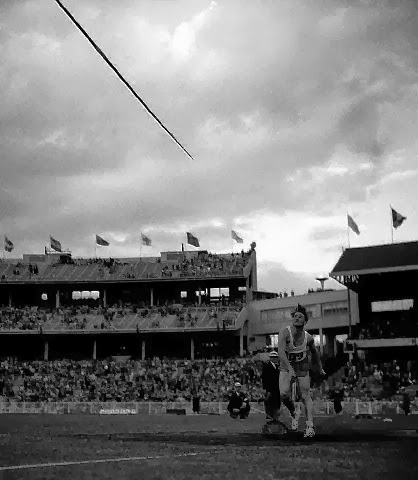 In his 1957 book “To the top of the spear”, Danielsen speculates that the world's best javelin or discus throwers could reach lengths of at least 120 meters using the spanish technique. Danielsen’s mark was surpassed by the Finn hammer thrower P. Saarikoski who sent the javelin at 99.52 m (98.70 m according to other sources). 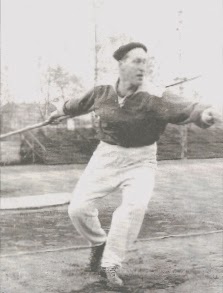 Could the spaniards have won the 1956 Olympic javelin title? Yes and no. Had they kept the style secret till Melbourne they would certainly have taken the javelin world by surprise.  However at the beginning of October, a month and a half before the Games, Salcedo used the new style during a competition in Paris. This opened the way for experimentation with the new technique to non-spanish athletes but also alerted the instances of the international federation who by the end of the month had modified the rules so as to ban the rotational technique. However, even if they had kept the secret, the athletes from Spain would not have had the occasion to throw at Melbourne since Franco’s government had, at the last moment, decided to boycott the Games.

With the rotational style banned, Erausquín went back to the drawing board and modified his technique, suppressing the rotations. With this adaptation de la Quadra was able to throw 82.80 m. There exists a mention of Erausquín himself throwing 94.50 m in 1957, but this may be another mythical result. The final nail in the coffin of the spanish style was hammered by the further change of the rules which stipulated that the javelin must be held at the grip and thrown over the shoulder or the upper part of the throwing arm.

I can understand that long throws and in particularly widely dispersed ones may be the cause of accidents. As a matter of fact even now, with the classical technique and modified javelins, there are accidents, even serious ones. However should we limit ourselves to short throws on the basis of security arguments alone? While I could understand this as far as competition is concerned, I can only regret the fact that we have not kept the spanish style alive as the one making possible the longest javelin throw by a human being. Wouldn’t it be just great to have a world record at 125 m for men and women breaking the 100 m barrier?

Posted by Vasilis Grammaticos at 18:10